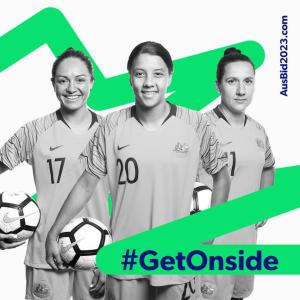 Australia has officially launched its bid to host the 2023 Women’s World Cup.

The FFA launched its “Get Onside” campaign on Monday morning in Sydney.
Matildas record goal scorer Lisa De Vanna urged all Australians to register their support for the bid.

“I’m really excited that we are bidding for the 2023 World Cup,” De Vanna said on Monday.

“When I think about it as a kid, I think back to my time in Perth and I never thought in a million years that I would be standing here and talking to you guys about bidding for a World Cup.

“There’s no bigger event or pinnacle to women’s sport or football than playing at a World Cup.

“I’ve played for 15 years in the national team and I’ve been to three World Cups and possibly a fourth one in six months’ time and there’s no bigger stage than playing that.

“I remember going and playing in Penrith and having 17,000 people sing the national anthem to me and there’s no emotion (like) that. And to be able to have that on home soil is fantastic.

“Now there’s little girls out there that can look up to us as role models and have an opportunity to play in the biggest game in the world, in Australia.”

De Vanna said Australia had shown it could host major events and hosting the Women’s World Cup would “cement” a changing culture of supporting women’s sport.

“Australians, we love winners. And we have inspired our nation by the way we play but mostly how we come across as human beings and dedicate and sacrifice for the sport,” she said.

“We’ve shown in the past that we can host great major sporting events and put on a good show because as Australians, it’s all or nothing.

“So here we are, bidding for something that’s major. So we want everyone to get on board because this is what it’s all about. For our future, and the change in women’s sport, because this will cement it and forever be in history if we do this.”

Meanwhile, Football Federation Australia chief executive David Gallop urged “all Australians to get behind the bid for the 2023 Women’s World Cup”, saying it would be good for the sport and Australia as a whole.

“It’s important to demonstrate to FIFA that the country is behind this, that it can be a great thing for women’s football, for football and for the country and we’re really excited that we move to the next phase for our bid,” he said.

“We’re already talking to the federal and state governments (about) training facilities et cetera, so getting those things in shape and waiting for the formal process to start over the next couple of months.”

Gallop confirmed the bid process will commence over the next few months, with the successful candidate expected to be announced by the middle of 2019.

He said a successful bid would take the Matildas’ influence and popularity “up another gear” and would have a positive impact on the country.

“This would turn things up another gear. The Matildas have been magnificent over the past couple of years, performed very well and when they’ve played on home soil, they’ve moved from 5-6,000 crowds to sellouts and we’re going to see that in the next couple of weeks at Penrith and Newcastle,” Gallop said.

“So this will be great for women’s football but it’ll be good for football generally. It will bring social and economic benefits to the country and it’ll increase the commercial value of the game generally.

“So there’s a lot to get behind with Get Onside.”

Yesterday afternoon, all our Youth teams had a hit out in a series of trial matches at LMRFF at Speers Point against the Emerging Jets teams. For new squads that had only been picked just recently, and hadn’t trained together as a team, all four teams gave a great account of themselves.

Our final Youth NPL Squad for 2019 is our oldest, our Under 16 Youth NPL team. To these boys, who will be in their final year of youth football before their possible elevation to the Senior squad, we trust they will enjoy their football, and make the last year a positive one. The boys are listed below. Good luck!

All at Hamilton Olympic FC congratulate and welcome our Under 15 Youth NPL team for 2019 below. After last week’s trials, the players below will be the club’s representative in the upcoming season and we trust that they have a successful 2019 season in the blue and white.

Hamilton Olympic’s  new look Youth NPL squads will have their first hit out  this Saturday, 27th October at the Lake Macquarie Regional Football Facility at Speers Point against the Newcastle Jets Academy in an afternoon of trial matches.

Kick off times for the 4 grades will be:

All the best to all our teams.

Hamilton Olympic FC completed their Youth NPL trials for 2019 last week. Congratulation to the boys below who were selected in our Under 14 YOUTH team.

The club wish the team all the best for the upcoming season. With the calibre of the boys selected, the club are looking forward to the team having a successful 2019 season. 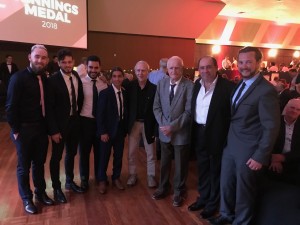 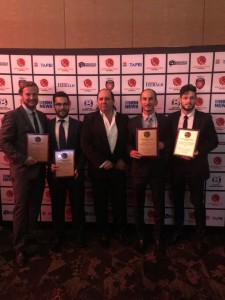 Last night saw the culmination of the 2018 Northern NSW Football NPL season with the Annual Jennings Medal Awards Night at the Starlight Room at Wests Newcastle.

Over 400 guests saw all the various Award winners acknowledged. The club’s representatives were on hand to accept the following Awards that the club received-

Also on the evening, Olympic Junior and current Jets player Adam Zervas was also recognized in his fantastic achievement in representing the Australian Under 16 team last month in the Under 16 AFC tournament in Malaysia that saw our team qualify  for the Under 17 Youth World Cup next year.

Also included in the photos are Graham Jennings, FFA Hall of Fame Inductee( 44 full caps for the Socceroos)  and who the main award was named  on the evening, as well as Kevin O’Neil and Jack O’Brien, both ex- local great footballers from the 40s and 50s who represented Australia.

Johnny had an outstanding season at the Jets in the 2017/ 18 season, featuring in the Grand Final team match against Melbourne Victory.

All at Olympic pass on their best wishes and are looking forward to your return on the park with the Jets. 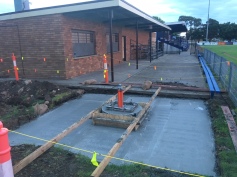 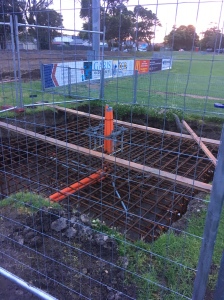 Whilst the recent wet weather has slowed the progress with the new drainage installation on the playing field, the NCC staff and contractors have been busy completing the positioning of new cabling, poles and associated lighting upgrade at the Oval.

The third of the 4 new light pole foundations
was completed yesterday, with just the foundation at the north western
corner left to be finished.

The new cabling is almost complete, and
yesterday saw the delivery of the 4 new light poles, ready for their
assembly. 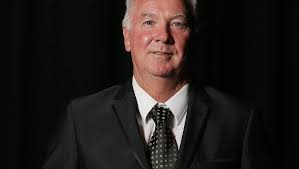 Head Coach, Peter McGuinness would like to announce his Senior Coaching Staff for the upcoming season, 2019:

Finally, our Under 20s coach of the last three years, Greg Asquith will be stepping back in his role at the club, due to work commitments. Greg fortunately won’t totally be lost to the club, as he will coach one of our Under 9 SAP teams.