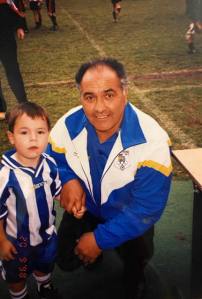 After fighting a brave battle against a serious illness for close to four years, Jim unfortunately passed away early this morning.

Jim’s contribution and legacy in making Newcastle Olympic the Club it is, was immense. He was the driving force for close to 30 years in establishing the Club to where it is today.

To Daphne, his children, grandchildren and all the Papas family, our deepest condolences from the Club.

May he Rest in Peace

Newcastle Olympic take on Central Coast Mariners Youth in a trial game as part of their preparation for the 2021 season.

The match is scheduled for Tuesday on the 2nd February at the Lake Macquarie Football Facility at Speers Point.

The game kicks off at 6:00pm and the entry is free of charge.

Newcastle Olympic were defeated 1-0 by Many United FC in their first trial game of the 2021 season.

All at Olympic thank Manly United FC for travelling to Newcastle for the weekend’s matches. We wish Manly all the best for the up coming season.

Over 80 girls and boys from various clubs throughout the Newcastle region had a fantastic four days, improving their football skills and making new friends. The behaviour and enthusiasm of the participants was great to see!

The club would also like to thank our wonderful coaches, who ensured the clinic was well organised and run professionally. They were- Reece, Paul, Blair, Nick, Elliot, Jared and Andrew.

Newcastle Olympic FC begin their 2021 campaign with a trial match this Saturday afternoon , 23rd January at Darling Street Oval. The team are in their third week of training under new head coach, Joel Griffiths. Both Joel and assistant coach Glen Chapman have been working the team diligently, and the boys are looking forward to their first hit out of the year.

Their opponents on Saturday will be Manly FC, who are one of the leading clubs in the Sydney NPL competition.

Coached by Adam Griffiths, Joel’s twin brother, sibling rivalry will no doubt make it an interesting evening. Added to that, younger brother Ryan will step out in the colours of Olympic for the first time on Saturday.

All three brothers are ex- Socceroos, and all played with the Newcastle Jets, with the twins being part of the Grand Final winning team of 2008.

Matches are: This Saturday, 23rd January at Darling Street Oval 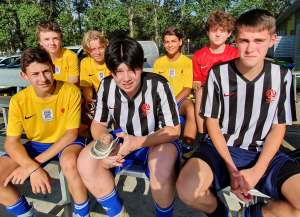 More than 90 talented boys aged 14 & 15 from across Northern NSW converged on  Lake Macquarie Regional Football Facility  for our first Talent Identification Camp for 2021 with 7 of Australia’s most respected coaches.

Find a statement below from Mr Victor Dominello MP, and Minister for Customer Service in the NSW Government.

“I am pleased to advise that funding of $300 000 has been approved through the NSW Infrastructure Grants Program for the redevelopment of the grandstand and amenities complex at Darling Street Oval.

The Infrastructure Grants Program supports communities in the building, renovation and fit out of infrastructure. Funding is available for arts and cultural infrastructure, projects that enhance facilities used to shelter communities and provide emergency services and for sport and recreation  and essential community infrastructure .

These grants are made possible by the Club grants Category 3 Fund, which reinvents a contribution from the state’s registered clubs gaming machine profits back into community projects.”

All at Newcastle Olympic FC sincerely thank the State Government for choosing our application to receive this funding. We also appreciate the on-going crucial support of the City of Newcastle and our local State member, Tim Crakanthorp, towards improving the facility at Darling Street.

Our vision of a renovated oval is closer! Stay tuned for further information.

The Annual NOFC Summer Coaching Clinic is just two weeks away. If you are looking at keeping your child ready for the upcoming football season, then the Clinic is just the thing…..

The  Clinic will be held at Darling Street from Monday, 18th January, until Thursday, 21st January, inclusive. There are still vacancies available. The Clinic co-coordinators are again Reece Fellas and Paul De Vitis.

Find below a link to the Clinic, where you can register your child. The Clinic is open to girls and boys from any Club in the Newcastle Region between the ages of 5 year to 13 year.