Players, Coaches, Managers and families are all welcome. 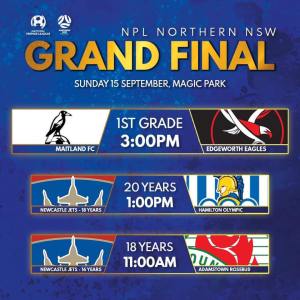 The Under 20s Grand Final sees the Newcastle Jets feature in the club’s second match of the day, and while they’ll enter this one as heavy favourites, Hamilton will be confident they can nail out another upset win and take the championship crown for the second year in a row.

The Jets dominated Lake Macquarie City in the Semi-Finals, pouring out an 11-1 aggregate win and lead the competition in both offensive and defensive stats totalling 65 goals whilst conceding just 19.

Olympic toppled the Premiers of the competition in the Semi-Finals though, keeping Broadmeadow scoreless over the two legs to win 1-0 on aggregate. They have managed to do fairly well in the big games as well having attained seven points when competing against the other top four sides.

When the two sides met in the regular season, the Jets won out in rather comfortable fashion with 3-0 and 3-1 victories but with stars such as Kane Treble, Jakob Cresner and goalkeeper Jez Murray, who have all had a heap of First Grade experience, along with their go-to scorer Jared Muller who has scored 10 this year, it would be silly to write them off.

Two of the main goal-scorers of the competition come from the Jets squad though – Nick Martinelli who has scored 16 from 17 games and Blake Archbold who has notched up 11 from 14 – as well as one of the stronger and more resilient defenders in the league in Patrick Bond.

Much of the team who will feature against Olympic were the same side that pulled out a tremendous 7-1 Grand Final win in the 18 Years game last year, while seven of the same Hamilton side which won the 20 Years Championship in 2018 will play in this year’s edition.

The underdog tag is clearly something Olympic have embraced in this year’s finals and while they have their work cut out for them against a top-quality and highly structured Jets team, a shock could be on the cards if they can continue their clean sheet streak. 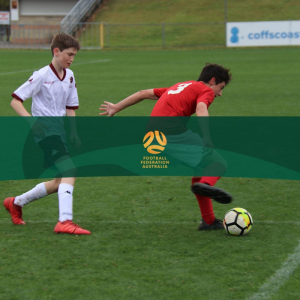 Northern NSW Football (NNSWF) has announced the thirty-four (34) players who have been selected to represent the region at Football Federation Australia’s (FFA) National Youth Championships for Boys in 13 and 14 Years.

More than 600 of Australia’s best young male footballers from around the country will compete from Monday 30 September until Friday 4 October 2019 at the newly renovated C.ex International Stadium in Coffs Harbour.

NNSWF Head of Football Development, Peter Haynes said NNSWF has had the pleasure hosting the tournament in Coffs Harbour for fourteen years and highlighted the talented pathways the Championships continue to create for players.

“Northern NSW Football along with the support of Coffs City Council and Destination NSW, have had the pleasure hosting the National Youth Championships for Girls and Boys since 2006,” Haynes said.

“There will be a number of technical directors and Football Federation Australia representatives at the tournament identifying players for future national squads.

“These opportunities highlight how invaluable the Championships are in providing young players with the chance for identification for future Australian team camps and the potential to one day represent our country at the highest level,” Haynes concluded.

The Championships, secured by the NSW Government’s tourism and major events agency, Destination NSW, will host thirty-six (36) teams from around Australia who will represent their State and compete for the title.

The 2018-19 Northern NSW Football (NNSWF) bid was supported by long-time partner Coffs Harbour City Council and Sports Unit, along with the NSW Government’s tourism and major events agency, Destination NSW all of which recognised the significance of the tournament as a catalyst for tourism and economic benefit to the Coffs Harbour region and the state of NSW.

The 2019 FFA National Youth Championships for Boys are proudly supported by the NSW Government through its tourism and major events agency, Destination NSW.

Congratulations to the 11 players from Hamilton Olympic who will be featuring in the NNSWF teams competing in the Football Federation Australia’s (FFA) National Youth Championships for Boys in 13 and 14 Years in late September/ early October in Coffs Harbour.

Out of the 34 boys chosen between the two Northern teams, nearly a third of the players are from Hamilton Olympic FC, a massive achievement. ( 11 out of 34)

We wish our boys and all representatives from Northern good luck at the titles. 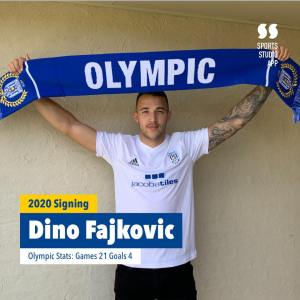 2020 Signing | Hamilton Olympic FC are proud to announce former Olympic Youth player DINO FAJKOVIC has signed for the club. Dino made his Olympic 1st Team debut as a 17 year old in 2009. 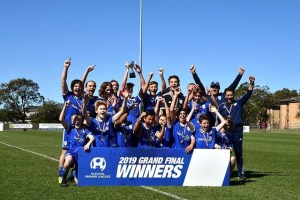 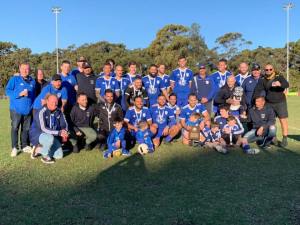 A feast of Football tomorrow, with 3 Olympic teams making it through to their respective Grand Finals tomorrow. Get out there and support the teams, all at the Club are proud of their achievements, and wish them well!

🏆 Zone League Two 1st Grade Olympic v Nelson Bay
Lisle Carr Oval, Whitebridge 2.30pm Kick off
After advancing to the Grand Final courtesy of an aggregate score over two legs with a 4-3 score over Kahibah, the team will be primed to finish off the season with a Grand Final victory. Coach Louie D’Amico has rarely had the same team to pick up each week, with a long injury list, coupled with overseas holidays and work commitments. The effort in getting to the Grand Final is to be commended, and we wish the team all the best for tomorrow. Of the 19 players below, 14 have played with the club in either the NPL/ First Division/Juniors!
1st Team Squad:
Andrew Sokalaridis (GK), Paul Hunt,(GK) Will Stewart, Dean Chivas, Nicholas Sofianos, Nick Xenakis, Lukas Papadopoulos, Luke McGuinness, Antoni Fellas, Paul De Vitis, Lukas Thodas, Jackson Richards, Alex Provost, Tynan Wingrove, Kristopher Sofianos, Ricky Cummings, Reece Fellas, Dimitri Patsan, Daniel Fellas
OFFICIALS- Luigi D’Amico, Vasilios Pappas, Kosta Xenakis, George Safouris, Paul Clarke

Players, Coaches, Managers and families are all welcome.

Soft drinks/ water will be provided on the night.

ADULTS, Bring your own alcohol, (BYO) as there will be none for sale at the Hall.

RSVP for catering to Heath Stewart