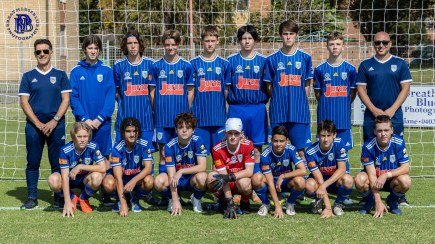 Derby day at Darling St Oval during the 8th Round of the Northern NSW Youth NPL competition! Traditionally, matches between these two opponents have always been a derby, regardless of where both opponents sit on the points table. On Sunday spectators will have the opportunity to watch the only two remaining teams on maximum points after 7 rounds of football, the u13s Broadmeadow team and the u15s Newcastle Olympic team!

The u13s Broadmeadow team has won every game played and scored 45 goals in 7 matches, an average of 6 goals per game! Can the Newcastle Olympic team put a stop to this on Sunday? They have nothing to lose but a huge scalp to claim.

In the u14s, only two points separate league leaders Newcastle Olympic with 3rd placed Broadmeadow Magic! This promises to be a great match up between two very strong teams fighting for the premiership.

In the u15s, Newcastle Olympic are not only one of the two remaining teams on maximum points but the ONLY team to have also gone through the entire 2020 season on maximum points as well! They are 11 points ahead of Broadmeadow but on derby day this means very little. Will they continue with the 100% record or will Broadmeadow cause an upset?

In the u16s 1 point separates the first 4 teams and this indicates another very close game between two very strong and aspiring teams. The only difference between them is that Olympic have scored twice the number of goals than the Magic team.

Newcastle Olympic vs Broadmeadow Magic at Darling St Oval on Sunday 9th May 2021.

First Grade kick off at 2:30pm

First Grade kick off at 3:40pm

Reserve Grade kick off at 1:40pm