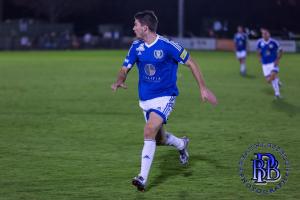 Olympic led 2-1 at the break at Jack McLaughlan Oval but Bren Hammel scored off a ball from Ayden Brice to put the defending premiers on level terms early in the second half. Olympic, though, were back in front 10 minutes later through a Tommy Spencer goal. Goalkeeper Danny Ireland was then the hero for Hamilton, making two late saves.

In the first half, Daniel Bird finished a well-constructed move inside five minutes and Kane Goodchild pounced on a turnover at the back late in the half for Hamilton. Edgeworth’s Japanese recruit, Keigo Moriyasu, equalised midway through the half with a powerful strike.

The grand final rematch win lifted Olympic to 13 points. Edgeworth are second on 10 ahead of the rest of the round.

Meanwhile, Maitland could be without former Central Coast Mariners midfielder Matt Crowell against Rosebud at Adamstown Oval on Sunday and beyond because of a potential hernia.

Maitland coach Steve Piggott said Crowell had battled the problem since their last trial, against Edgeworth, and he was unsure if the Welshman would need surgery.

“He probably won’t play this week, but we’ll see,” Piggott said on Friday. “It’s a possible hernia, but he can still play. It all depends how comfortable he is and how much damage he could do.

“We trained last Sunday when we were washed out and he was OK, but then he was sore afterwards. He’s had consultation with a GP and a physio and he’s going to get another consultation today.”

The Newcastle Herald was told Maitland have flagged the potential addition of Ryan Clarke on an injury waiver for Crowell. Clarke had an eight-month Northern NSW Football ban quashed on appeal to Football Federation Australia last month but a four-game suspension for playing as an ineligible player in H-grade remains. NNSWF football operations manager Alan Nisbet said Clarke would have to serve the four-match ban once registered.

As for Sunday, Adamstown have midfielder Dayne Pawlik back from suspension but Dan Clements and Daniel Yaxley sidelined with injury.

In the other game on Sunday, Valentine coach Darren Sills hoped to have Alex Tserapas back from injury for the clash away to Weston.

On Saturday, Lambton Jaffas will be without defender Michael Sessions against Charlestown at Edden Oval. Sessions was given a three-week suspension after a send off in the 2-0 win over Valentine last round. Also Saturday, unbeaten Broadmeadow host the Newcastle Jets Youth at Magic Park.