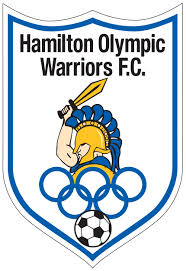 Hamilton Olympic downed Charlestown City 4-2 on a wet Darling St Oval to climb to the top of the NPL table.

Proceedings began in the 10th minute when Simon Mooney, with only the City keeper to beat, fired a shot into the hands of Kyle Predebon.

Four minutes later, a well taken shot by midfield ace Jacob Bailey opened the score for the home side.

Olympic continued to test the City goal time after time and against the run of play, a shot by Jared Ross deflected off an Olympic defender to end up at the back of Danny Ireland’s goal 1-1!

Olympic continued the pressure and a lovely through ball by Mathew Swan found Simon Mooney who had no problem putting the ball in the back of the net for a 2-1 lead.

Simon Mooney then returned the favour with a pin point cross to the head of Mathew Swan who added a third for Olympic. The teams went into half time with Olympic leading 3-1.

Olympic continued the second half from where they left off the first. In the 55th minute Jacob Bailey was at the end of a simple tap-in to make the score 4-1.

In the 77’ minute Ben Hughes executed a free kick for City which struck Danny Ireland’s crossbar and as the ball re-bounded, Scott Smith tapped it in to reduce the score to 4-2.

Charlestown City was reduced to 10 men when Cameron Sullini brought down Pat Brown, who was on his way with only the keeper to beat. Despite a late fight back by City, the score remained 4-2.

Overall an entertaining game of football in wet conditions and a result which brings Hamilton Olympic in 1st spot of the NPL ladder.

Hamilton Olympic meet Maitland in Round 9 of the NPL competition on 7th June at Cook Square Park at 2.30 pm.