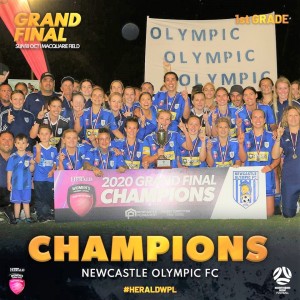 Newcastle Olympic completed an historic double with a 3-2 win over Warners Bay in the Herald Women’s Premier League grand final on Sunday.

The win put the icing on the cake for the women from Darling Street, who secured both the premiership and championship in their inaugural season in the competition.

The league’s two leading goal scorers, Olympic’s Jemma House and Warners Bay’s Jen Hoy, found the back of the net within the opening 12 minutes as a strong crowd at Macquarie Field were treated to a thrilling, end-to-end battle between the two star studded sides.

There was action aplenty from the opening whistle as Panthers’ captain Elodie Dagg pushed the Olympic defence deep onto its own line, while a long-range effort from Ellie Brown struck the post.

The decider’s opening goal came six minutes into the match as House found the final touch on a pinpoint cross from Georgia Amess. The delicate volley from House gave the premiers a one-goal advantage.

Warners Bay wasted no time in finding an equaliser. A bolting run from Sophia Laurie played Hoy into space, with the former W-League player too good for the Olympic defence as she weaved her way past goalkeeper Nat Wiseman.

Georgia Little left nothing to chance as she gave a way a free kick just outside the penalty area. The shot from Warners Bay’s Annika D’Amico sprayed over the bar.

Olympic returned serve on the scoreboard as the half neared completion. House was again on the end of a near perfect cross from Little, making the half-time score 2-1 to Olympic.

Momentum reflected a pendulum in the second half as Warners Bay appeared certain to level the score. Hoy and D’Amico peppered the opposing goal mouth as Hoy found the posts, while D’Amico sprayed a long-range effort over the bar.

And just as Warners Bay looked destined to score, Olympic found themselves deep in Panthers territory. A powerful strike from House found the post, only to deflect into the opposite post. Panthers keeper Ally Boertje unable to clear the ball as Laura Hall tapped in to extend the margin for Olympic.

Dagg gave the Panthers hope of a comeback as she switched a midfield turnover into a genuine chance. The following strike enough to reduce the deficit to 3-2.

Amess came from the field with an injury as House found her name in the referee’s book. The substitutions continued as Little made way for Stacey Day.

The closing stages were spectacular as Warners Bay pressed deep into the opposing half. Dagg looked certain to score as her strike forced a diving save from Wiseman, before Olympic’s Brooke Summers made a scrambling save to avoid the game going into extra-time.

A last-minute long-range effort from Hoy was not enough to square the score as Olympic recorded a memorable 3-2 win.

Our WPL teams are proudly sponsored by Sangerz