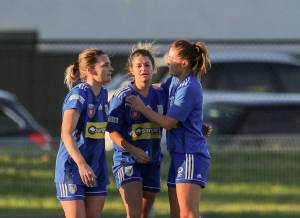 Adamstown coach Ryan Campbell described her as “the difference” and Newcastle Olympic mentor Harmonie Attwill declared she could play for the Jets after Jemma House produced her third hat-trick in four games with a seven-minute goal blitz at Darling Street Oval on Sunday.

House’s first was on the counter attack. Attacking player Laura Hall had plenty of time to carry the ball up field before releasing a perfectly weighted pass through Adamstown’s back line for House to pick up in space and charge towards the box with only Young to beat. Her left-footed shot was low and hit the far post before going in.

The second came after House won the ball off an Adamstown defender and slotted in a one-v-one situation. The third came on the counter with Georgia Amess running the ball on the right, drawing a defender and passing to an unmarked House for another left-footed strike.

Hall made the most of a defensive error to score a goal of her own in the 40th minute.

House also scored hat-tricks against Mid Coast in round one and Warners Bay in round three.

Olympic moved to nine points with the win, two clear of Adamstown in third and one ahead of United.

“They’re a physical side and what our girls showed was a lot of maturity,” Attwill said.

“We did have a game plan. We stuck to it and … did everything right. We probably could’ve scored more. We created a lot of opportunities but we had to work hard for it.

“They obviously had a pretty serious injury and that definitely changed the game unfortunately for them.”

Campbell said the six-goal rout would prove “good learning” for his young side.
“They were better than us. They deserved to win. They were probably more powerful than us,” Campbell said.

“There were signs of it last week where the girls don’t 100 per cent think that they can compete with those teams.

“It was good learning for us and, I said to the girls, one day can’t affect the whole season. Our main focus this week will be trying to be a bit more resolute and not get caught where we give away too many chances.”

Adamstown opened the season with wins over Thornton and defending champions New Lambton before drawing 0-0 with league heavyweights Merewether in round three. They face Magic in round five.

“I said to the girls if we want to get results, we need someone to step up like [House] does because individuals make a big difference,” Campbell said.
“Tara [Andrews] scored 40-odd last year and Jenna [Kingsley] 30 the year before. If it’s going to be close, you need to have someone who dominates the comp.”

Ellie Brown scored a double as Warners Bay came from behind to beat Thornton 3-1 at Thornton Park on Sunday. The Redbacks led early after Taleah Mountford scored. The match was locked 1-1 at the break.

Tomeeka Davies was the other scorer for the Panthers, who back up Wednesday night against Magic before rounding out a tough seven-day period by playing New Lambton at Alder Park next Saturday.

Warners Bay were without experienced defender Airlie Davies due to injury on Sunday but coach Craig Atkins hoped she would be cleared to play Wednesday night and was also still sweating on an international clearance for American Jen Hoy.

“We gave Thornton the first goal and it was another soft goal that we conceded, so that’s something we really need to work on,” Atkins said.

“It could have easily been eight or nine-one, so we’ve got a bit of work to do in the final third to make sure we capitalise on all of our chances.”
Defending champions New Lambton are still yet to win a match this season after losing 3-0 to Mid Coast at Alder Park on Sunday. All three goals came in the second half and Mid Coast coach Michael Grass said: “In the end I think we were probably just the fitter team.”

Jess James scored twice and Layni Fens also got on the scoresheet as Mid Coast notched their second win of the season and moved to six points, level with Warners Bay.

The Eagles suffered a blow before kick-off when goalkeeper Ruby Jones was taken to hospital after sustaining a leg injury in the reserve-grade match. They then lost co-captain Toria Campbell around 20 minutes in to a knee injury and were without utility player Kaitlin Radstaak due to injury.

New Lambton coach Brad Jones was happy with what he described as “an arm wrestle” of a first half but said in the second half “we were just not up to scratch”.
“[After the first goal] our heads dropped, and I guess that’s the difference between having a team full of experienced players and a team, well both grades last year, that didn’t have to pick themselves up usually,” Jones said.

“Then we lost our composure and, to Middies credit, they felt that. They weren’t three goals better but we gave them three goals and they were good enough to finish them so they deserved it.
“For us, it’s just a lesson. The girls have got to understand that they’ve got to maintain their composure. I’ve asked for a response this week and that’s what I expect we’ll get.”