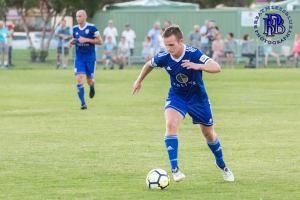 After starting out strong and looking like a finals contender, it’s been a disastrous second half of the season for Hamilton as they now sit closer to the bottom of the table than the top four while the Jets Youth have begun finding their groove again.

The young Jets came within a whisker of gaining victory last week against Weston but conceded a late, stoppage-time goal, but before that, slammed Valentine and put in decent showings against Maitland and Edgeworth.

For Olympic though, they drew with last-placed Lakes and extending their winless streak to six games (their most recent victory came in early May) but do have the wood over their weekend opponents having beaten them 2-0 earlier in the season.

A strength of Hamilton’s that saw them taste early success in the first half of the year was that of their solid defence as they only conceded 11 goals in the first 11 games, however in contrast, since Round 12 the side has leaked in 14 goals in 5 outings.

In the final third have been where the Jets have performed well and young star Maki Petratos has been a major standout in that area, as has Sam Donnellan in recent weeks since his debut in the top grade, but the only team that has kept the youth side scoreless is the club their facing on Saturday.

Both sides don’t have all too much to play for other than pride now, but given that there’s no pressure now, it may prompt the two teams to go for gold.

The two FFA Cup Round of 32 participants from Northern NSW will face off this weekend not only looking to create a bit of momentum heading into their national stage games in the next coming weeks, but more importantly, trying to push their way closer to the top spot and premiership.

Both sides have been on terrific runs since gaining progression in the FFA Cup – Edgeworth have picked up four wins in as many games, while Maitland haven’t been defeated in their past six outings – and sit just five points away from one another on the table however the Magpies have played three less games.

Although the Eagles have currently played more matches than every other team in the league, they’ve put the pressure on the sides below them who are fighting in the premiership race to keep up with wins, and in recent weeks, their attack has been firing and their defence has been rock-solid.

In the past four weeks, Edgeworth have managed to score 10 goals, and have only conceded two in that same time, and possess both the best offensive and defensive records in the competition.

While Maitland haven’t been as good at the back, their form in front of goal has been strong having managed to score 14 over their past five, and they’ve only been kept scoreless on one occasion this season.

Drama of the latest fashion ensued in the previous meeting between the two sides which saw the Magpies scored two goals in stoppage time to overcome a 1-0 deficit and steal all three points.

Maitland coach Mich Bolch echoed the enormity of the match describing it as a “real six-pointer” and that it was vital his side bring their best.

“If they win, they open up an eight-point gap on us, and if we win, we move two behind with three games in hand.

“They are the side I respect the most. They are very well coached and organised and I’m sure Zaney [Damian Zane] will have them primed for this weekend.

“The boys are looking forward to the clash. These are the games you want to be involved in.

Although the last encounter between these two sides will probably be in the minds of their opposition, Bolch suggested it wouldn’t be so for his team and that they needed to focus on their game-plan but also shutting down some of Edgeworth’s key attackers.

“We got lucky with the win against them in our first encounter with a keeper error handing us the late winner,” he said.

“We were very good in the second half against Charlestown last week and we need to take that form and intensity into this game.

“We will need to shut down Smith and the old fox McBreen and that will go a long way to winning.

“We just need to concentrate on getting our game right. If we do that, we can compete with anyone in the comp.”

When Adamstown and Lakes met in Round 7 this year, they were both sitting in the same spot on the ladder as they are now showcasing how frustrating and difficult of a season these two have encountered.

Only one point separates the two at the bottom of the table and with Valentine not too far away from them in ninth place, the battle for the wooden spoon is still alive making this match crucial for both in their attempt to avoid the ‘prize’.

Both have demonstrated some top-quality football in patches yet have struggled to close-out matches and attain any points to their name.

The Roosters’ only victory of the season came in the correlating fixture at home, while the Rosebuds have knocked off Charlestown and Hamilton but are currently on a six-game losing streak.

The attack of the two teams (both 14 goals scored) is clear as the worst in the league while in defence they’ve struggled to as neither have been able to muster a clean sheet yet.

Since their return to the NPL NNSW, Lakes are still undefeated when facing Adamstown – a statistic the hosts this weekend will need to end if they don’t want to be looking down the barrel of the dreaded last place position.

Coach of Lakes Nick Webb confessed his side were disappointed they couldn’t hold on late for a victory over Hamilton last weekend but that the team were confident of being able to do the double over the Rosebuds.

“The boys have been doing really well,” Webb said.

“We were gutted not coming away with the Hamilton win.

“[This weekend] it will be two desperate teams smashing it out, so we are confident but also cautious.

“Our focus is concentrating for the full 90 minutes.”

Coming off the back of the bye, Broadmeadow will be fresh and ready to continue their push for the premiership and they meet a team this weekend who they trounced in the earlier fixture, 9-1.

Valentine have been winless over their past five games and are currently in danger of finding themselves with a second wooden spoon in as many years if they can’t manage to turn their form around.

They’ve struggled defensively over the course of the year having conceded 43 goals already (three less than their total goals conceded last year) and in their past four matches, they’ve let in a massive 15 goals.

In addition to that, when playing at home, the Phoenix have leaked 20 from their 6 encounters at Croudace Bay and while their opponents haven’t been brilliant in defence either, the attack of the Magicians has been one of the best in the league – boasting a current total of 35.

The Phoenix will be focused on making sure what happened last time against Broadmeadow doesn’t happen again at home this weekend, but with the premiership well in the sights of Magic, they’re going to be hard to stop.

Weston will host the in-form Lambton Jaffas this Sunday knowing that a loss will strongly affect their chances of holding onto a finals place and also ruin their hopes of a surprising premiership.

The Jaffas have pulled off three consecutive victories to pressure the five sides that sit above them on the ladder and sit just five points away from the Bears with two games in hand.

Weston have only lost one game from their past eight though – which includes six wins – and have been electric in front goal having scored 34 so far and are the only team in the league who have been kept scoreless in a match so far.

While the hosts have proven that they possess goal-scorers right across the park, they’ll need to give special attention to the man proven to be the best in the league, Lambton’s Braedyn Crowley, who sits at the top of the Golden Boot race with 11 goals despite only playing 10 games.

In the earlier matchup between the two, the Jaffas successfully and impressively held onto a 2-1 lead with ten men for 70 minutes to collect all three points and it’ll be a wrong that the Bears will be looking to right.

Weston’s coach Kew Jaliens noted after last week’s draw with Jets Youth that his side needed to show higher intensity right from the first whistle.

“We need to be sharp from the start,” Jaliens said.

“The slow start cost us the penalty and all the chances we had against us.”

Jaliens highlighted though that the confidence amongst the squad was still high but that their focus wouldn’t be aimed too far away.

“The feel around the team is good,” he said.

“We have had some good results, but there is still a long way to go.

“We try to take it a game at a time and start fresh every week with an opportunity to win three points.”