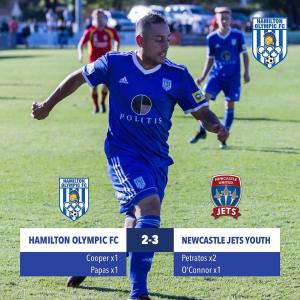 It was back-and-forth stuff at Darling Street on Saturday afternoon, with both Hamilton and Jets Youth holding the lead at various stages of the match.

They both came from behind – but in the end, it was Jets Youth who managed to do it that bit better as they clinched a hugely important win which moved them closer to the top four.

It was Hamilton who got things underway in the 12th minute of play when a Tom Davies shot deflected nicely into the path of Rhys Cooper who turned home his fifth goal of the season.

A fantastic free-kick in the 15th minute from Yerasimakis Petratos had Tyler Warren at full-stretch, but unable to keep the ball out and brought Jets Youth level.

Jets Youth went ahead in the 58th minute when Joey O’Connor sent a brilliant header wide of an out-stretched Warren.As their opponents had done to them earlier in the piece, Hamilton struck back just moments later. Reece Papas was on hand to take full advantage of a mishandle inside the penalty area and made the score 2-2.

In the spirit of the tit-for-tat battle which was unfolding at Darling Street, Jets Youth struck back in the 66th minute to go ahead once more. It was Petratos again, this time at the front-post after a fast piece of play to finish into an empty net.

Both sides kept pushing, particularly Hamilton who through Rhys Cooper especially looked like they may have had another goal in them. It wasn’t forthcoming though, and Hamilton missed the chance to gain ground on the top four.Jets Youth coach Labinot Haliti was pleased with the result against one of the league’s big clubs.

“Hamilton are traditionally a tough match but we got the victory, so it was a good weekend,” said Haliti.

“We had five of our youth team boys up in China with the first team, and that’s obviously the whole idea of the youth team, having as many boys as we can into the first team.

“If a young kid is doing well, they’ll get an opportunity and Joey [O’Connor] getting on the scoresheet was great, and it was a chance for some other boys who haven’t had so much game time or even boys from under 18s who stepped up.

“We were short of the people who have been playing pretty much all year, but the boys coming in, young boys stepped up and that’s the whole idea. We’re trying to build a competitive environment, players that will do a job and it was very good on Saturday.

“The results helped, and the players start to believe more.”

Haliti was particularly pleased with the way his side banded together and got the three points.

“As a team, back-to-front and front-to-back we did a job,” said Haliti.

“To be honest, we were ruthless, we scored three goals, but take nothing away from Hamilton they’re a good side too. We just got into our game bright and early, started moving the ball around and as the match started to go on we started to grow in confidence.

“Compared to where we were last week against Edgeworth, after five minutes we were down 3-0, so obviously as the match went on we built confidence and that helped a lot. The boys coming in stepped up, and it was great to see.”

An important result for the makeup of the bottom of the ladder, it looked like the two local rivals would be sharing a point as they game came to a close with the scores locked at 1-1.

But up stepped Sam Walker, scoring his and Lakes’ second of the day with just minutes remaining to secure a clean sweep over Valentine and shoot the Roosters up the ladder.

As well as closing out the scoring, Walker got it underway in the 12th minute. Paul Sichalwe played him a nice ball through the lines, and Walker chipped Scott Carter to put Lakes ahead.

Tom Sparre lost the battle with a bump in the CB Complex pitch in the 24th minute, which allowed Valentine to come roaring back into this one.

Sparre attempted a clearance, but before he could connect with the ball it hit a bump and lost his footing, putting the ball directly into the path of Phoenix striker Joel Wood.

Wood played in Josh Murray, who was tackled but the ball fell nicely to Wood who made no mistake from close in front and levelled things up.

On the half-hour mark, Valentine lost a key man to injury. Zac Sneddon, still struggling with a bump he picked up in the opening stages succumbed and was replaced by Aaron Niyonkuru.

Mitch Hunter put a shot just wide in the 52nd minute as Lakes started the second half stronger than their opponents. Joel Wood had a shout for a penalty waved away in the 64th minute.

Chances at either end and it looked certain that a third goal would be forthcoming – and Sam Walker ensured that would be so in the 87th minute, as he poked a ball past Scott Carter for his second of the day.

Stuart Plant pulled off a magnificent save from close range in the 89th minute to prevent Reece Pettit, and it was Lakes who took all three points.

A first-half blitz on Saturday did the job out at Rockwell Automation Park as Edgeworth set themselves up to inflict some real damage to Weston.

They didn’t add to their tally in the second half, and a goal-of-the-season contender from Nathan Morris was little but a consolation as Weston went down for the second time in a week.

Adam Cawley opened the scoring in the 12th minute after glancing in a ball which had been sent in by Aaron Oppedisano.

He doubled his, and Edgeworth’s lead just five minutes later. The beneficiary of a nice ball in from Will Bower, Cawley sent his header wide of Kane Runge and into the bottom corner.

Bower was involved again shortly after, he was brought down by Callum Bower inside the penalty area and a spot kick was awarded. Dom Bizzarri stepped up and sent Runge to the wrong way to make it 3-0 Edgeworth.

As he so often does, Tyson Jackson was on hand to set up Edgeworth’s fourth and put the result virtually beyond doubt before half-time. His ball across the six-yard box found Bailey Garland, who scored his second in as many weeks.

Five minutes after half-time, Weston had one back through an extraordinary strike from Morris. Charging out of the back line, Morris won the ball and played a one-two with Jackson Burston.

Without taking another touch, Morris hit through the ball and left Josh Low standing. It was little but consolatory in the end though, Weston now without a win since round 12 while Edgeworth shot to the top of the ladder.

“The first half was really good, and in the second half the conditions worsened and it was tough to play in, but we grinded out a win,” said Zane.

“We were probably scoring more goals than we thought we would at the start of the year, and we had a few of our defenders who missed a bit of pre-season so we concentrated on getting the defence back right, which we did.

“About a month ago, we felt the only thing that was left to do was the final third and not just creating chances, but taking them more so. We’ve been working hard on that, it’s sort of the final piece of the puzzle for us.

“With the turnover of players, we never thought we’d be that fluent at the start of the year so this was the plan coming to fruition. We’re starting to gel and look quite dangerous, which is good.”

The goal has always been semi-finals for Edgeworth, but Magic’s loss on Sunday means the Eagles are now in first place.

“We’ve got to the stage where with the results in the week’s past, we’re still two wins off the semis but we’re at ease with that,” said Zane.

“We’ll start looking at premierships, for us, it’s a long way. Six games away, and I know it’s an old cliché but we’ll take it game by game and see where we end up.

“If we continue improving, we’ve been training really well. The last two Tuesday night sessions, you could see a positive result coming each week. We’re looking strong physically, and if we keep working hard then I think we’ll keep getting rewarded.”

A three-goal first-half set Lambton on their way to tighten their grip on a spot inside the top four on Sunday afternoon.

The last half-hour was much trickier as the visitors were forced to defend with ten men, but they kept the sheet clean and secured three points.

Lambton opened the scoring in the 27th minute when a tricky corner in wasn’t dealt with at the near post and found it’s way in with the help of a Rosebud defender.

Another corner, this one in the 34th minute would bring Lambton further undone. Marcus Duncan rose highest this time, the defender scoring his second goal from a set piece this season and a crucial one for Lambton.

They had three just before halftime when a pass across the defence from player-coach Shane Cansdell-Sherriff sold his left-back short. Lambton swooped, and Braedyn Crowley finished for his third goal in two games.

Lambton went down to ten men in the 61st minute when Michael Kantarovski was sent from the pitch for a challenge which was adjudged worthy of a yellow card. It was the midfielder’s second of the day, so he was off for an early bath.

Despite having the man advantage for more than half an hour at the back end of this one, Adamstown was unable to find the breakthrough. They slipped down to ninth on the ladder, while Lambton jumped to within three points of top spot.

Last time these two sides clashed it was a fiery affair, with a red card in the second-half and plenty of talking points.

While it wasn’t so fiery and the talking points weren’t as plentiful on Sunday, the result was monumental and things have tightened up across the league as a result of the Blues’ solitary goal.

Already racked by injuries, Charlestown now has another to deal with after Daniel Laiman went off in the opening minutes.

Things were tight and chances were at a premium, with neither side willing to give an inch. It took a touch to send the defender the wrong way, and a tricky finish from Kane Goodchild to send Charlestown in front just before the half-time break.

The injury crisis went from bad to worse for Charlestown in the 44th minute, as Ljubo Milicevic was helped from the field and substituted off after going down.

Things began to open up in the second-half, with Magic looking to go forward and find a way through in order to maintain their advantage at the top of the ladder.

Jim Fogarty was in goal for his first match in Charlestown colours and was proving important with a swag of saves and punches clear to keep the red men at bay.

He and a depleted Charlestown defence did enough in the end – keeping Magic out, their lead intact, and going level on points with Maitland in fourth.