Michael Bolch will not be Hamilton Olympic’s Head Coach beyond the 2017 NNSW NPL Season. 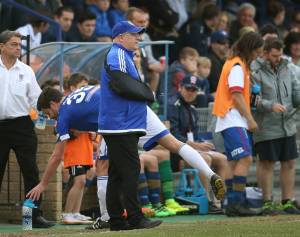 Michael (Mick) Bolch has informed Hamilton Olympic FC that he will not be seeking to continue in his role as Head Coach beyond the 2017 NNSW NPL Season.

“I have really enjoyed my time at Olympic and the success we have had here. I want to thank the Club for their support through all the years I have been here and I look forward to finishing this season on a high note” said Mick Bolch

“Mick has enjoyed great success as Head Coach since he joined us at the start of the 2010 season. His record speaks for itself – 2012 Premiers, undefeated in 2016, two Grand Final appearances, and three Club Championships in 2012, 2014 and 2016” said Club President, Mr. George Sofianos.

In overall terms, his record as Head Coach in the regular State League/NPL Seasons from 2010 to 2017 (to 27 May) is impressive:

“We look forward to Mick continuing to lead our Club on the field for the remainder of the 2017 Season. We are currently leading the Club Championship pointscore, and all our senior teams are well placed to qualify for the semi-finals later this year.” said Mr. Sofianos.

“As important as the on-field success the Club has enjoyed under Mick’s leadership, has been the way in which Mick has represented our Club. He has respected our traditions and values from day one. He has always treated Club supporters and officials with the utmost respect and our relationship with Mick has always been positive and collaborative. He is a friend, and will always be welcome at Darling Street.” said Mr Sofianos.

The Club will move towards the appointment of a replacement head Coach for the 2018 Season. Further announcements will be made in due course.