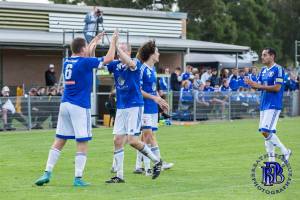 Two soft goals from corner kicks were enough for Charlestown City to walk away with 3 points from Darling St Oval on Saturday night.

A corner kick as early as in the 3rd minute of play was not cleared and during the ensuing scramble, the referee judged that the ball had crossed the line.

The opening 10’ were very fast with goal mouth action at both ends.

In the 15’ Matthew Swan sent in a cross for Kane Goodchild, forcing the Charlestown defense to extend itself in order to save the day.

After the first 20’ the pace of the game continues to be very fast and the attacking combinations by both teams produced a great spectacle for the neutral supporters.

By the 39” Charlestown rebound another Olympic attack, only for the ball to fall in the path of birthday boy, Kane Goodchild, who had no problem bringing the score level at 1-1!

In the last 10” of the half Olympic are piling on the pressure with Nathan Archibald extending himself yet again to force a corner from another great effort by Kane Goodchild.

Half time found both teams locked at 1-1 and a thoroughly entertaining game for the fans watching.

The opening 10” of the second half were similar in pace and attacking play by both sides.

In the 46’ an innocent corner by Josh Maguire was not cleared and Charlestown were on fire 1-2! A few minutes later Daniel Casciaroli forced Danny Ireland to make the save of the match when he bent his shot around the post for a corner.

In the 65” Scott Smith plucks a long ball out of the sky and forces a double save out of Nathan Archibald.

Between 60’ and 70’ Olympic have total domination and as Charlestown are pinned inside their half. During this period there are some great combinations of attacking play and Kyle Hodges can be seen in midfield, adding to the pressure.

In the 77’ Kane Goodchild breaks with Scott Smith and despite advancing the ball inside the box, hits the side netting of the Charlestown goal.

Despite the pressure exerted by Olympic until the last minute of play, Charlestown hold on to three very precious 3 points.