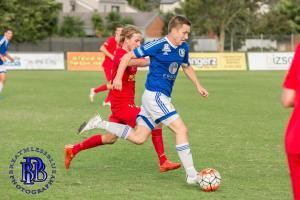 HAMILTON Olympic were dealt a bitter blow in the wake of their second-half slide to Lambton Jaffas with news on Monday that attacking midfielder Rhys Cooper will miss up to six weeks with a knee injury.

Cooper, who scored with a great solo effort in the first half, limped off late in the 3-2 round-one loss on Sunday night at Darling Street Oval, where the hosts had led 2-0 at the break.

Olympic coach Michael Bolch said it was hoped Cooper had only a cork from a clash of knees but it was found to be a grade three medial ligament tear.

“He was flying at the moment as well so it’s going to be a big loss for us,” Bolch said.

Bolch said the likely return of skipper Kyle Hodges (ankle) and Andrew Swan (bruised foot) at the back for the away clash with Adamstown on Saturday night “gives us options” in replacing Cooper.

“Andrew can go to left back and Leo [Bertos] can push into midfield,” he said. “Daniel Bird was fresh on the bench on Sunday night, so he comes into contention, so there’s options there.”

There was no hiding, though, from the loss of Cooper.

“He’s one who I think has definitely got the ability to be playing at the next level, and he should probably be there now,” Bolch said

“For me, he’s the best No.10 in the comp. He glides past blokes and is one of those guys who runs as fast with the ball at his feet as he does when he hasn’t.

“He’s scored some really nice goals as well. He scored some great ones last year and his one on the weekend was class, and he almost scored another from halfway.

“And he’s just turned 21. In my view, he’s in the top three players in the comp, he just needs to be given that chance. He’s one the Jets should be looking at.”

Hamilton were underdone for the clash on Sunday after recent washed out trials but Bolch said his side “created enough in the first half” to put the result beyond doubt.

Last year Hamilton went through the regular season undefeated before bowing out to Broadmeadow in the semi-finals and Bolch could see the positive out of the early setback this year.

“With no undefeated tag we’ll just get on with the job now, fly under the radar a bit and just keep improving,” he said. “If we can build on what we did in the first 45 minutes, we’ll be in four or five weeks where we need to be.”

Charlestown coach Shane Pryce was also reeling from defeat and an injury.

Midfield recruit Corey Atkinson had bleeding behind his eye and spent Saturday night in hospital after copping a stray boot against his former club, Valentine, in a 2-1 loss at Lisle Carr Oval.

Pryce said Atkinson, who saw a specialist on Monday, would be out for at least two weeks.

Of the incident, Pryce said: “There was no intent from what I saw, it was just one of those things.”

The Blues were without Jarryd Johnson and Cameron Hughes, who were at a wedding, while late goalscorer Rene Ferguson is recovering from illness and came off the bench.

Pryce said his side, who host Maitland on Sunday, were “a bit behind the eight-ball because we didn’t have as many trial games as I wanted”.

“We get a couple back this week and just start again, it’s not the end of the world,” Pryce said.

“There’s no excuses. Valentine had more urgency and were hungrier than us, so credit it to them.”