PS4 NPL NNSW Round 17: Hamilton Olympic held to a 2-2 draw by Valentine

Hamilton Olympic surrendered a 2-0 lead to Valentine Phoenix on a damp Darling St Oval pitch and thereby kissed the Minor Premiership goodbye with one round of the season remaining!

Olympic dominated play from the outset against a Valentine side that didn’t look capable of an upset.

The first chance to Olympic came in the 12th minute when Daniel Bird crossed from the left to find Simon Mooney who forced a finger tipping save by Perry Budden from a thunderous shot from just outside the box.

Three minutes later, Rhys Cooper was on his way with the keeper to beat but was chopped from behind just outside the area with the ensuing free kick going narrowly out.

Andrew Swan then crossed from the left only for a Valentine defender to push the ball for a corner before Kane Goodchild was inches away from burying the ball in the back of the net.

Five minutes before half time, Andrew Swan crossed again and Tommy Spencer volleyed it home for the opening goal 1-0.

Despite the domination of play Olympic was lacking in their final touch which would have enabled them to put the game beyond the Valentine team.

The second half continued at the same tempo as the first with Olympic dominating play in the middle of the park but again lacking in the final touch in front of goal.

On the one hour mark it took four attempts after three rebound saves before Kane Goodchild could head Olympic into a 2-0 lead.

Nine minutes from the end Kane Goodchild had the chance to bury a cross from the left by Grant Brown but instead of finding the back of the net he sent his shot over the cross bar.

Five minutes from time, a momentary lapse in concentration by the Olympic defence enables a Matt Paul to receive the ball inside the box without an Olympic defender anywhere near him and with such a gift, has no problem reducing the score to 2-1.

A few moments later Kane Goodchild was flattened inside the box by the Valentine goalie but the referee waived play on!

In stoppage time Olympic win a penalty after the Valentine goalie flattened another attacking player in the box but the ensuing kick by Kane Goodchild sent the ball into the hands of the goalkeeper instead of the Valentine net!

To add insult to injury, a deep cross from the right finds Brenton Olzomer on the left who squeezes g a shot in before he was smothered by the Olympic defence and 2-2 puts the Major Premiership beyond reach!

Olympic were without injured goalkeeper Danny Ireland and midfielder Jacob Bailey, who is out for the season. Defender Grant Brown picked up a yellow card and will now miss the last round and the first week of the finals. 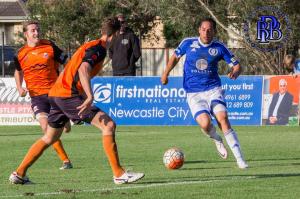