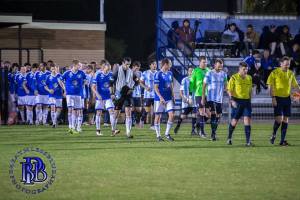 On a cold night at Darling St Oval, Hamilton Olympic took on Charlestown City as part of  Round 9 of the competition which was washed-out earlier in the season.

Olympic went on the attack from the opening whistle and had Charlestown on the back-foot from the outset. Charlestown were able to keep Olympic out until the first 14’ minutes but a good through ball by Kane Goodchild to Tommy Spencer who had his shot blocked, resulted in Rhys Cooper hammering the re-bound into an empty Charlestown net 1-0.

Olympic continued to dominate the game, created chances and like in the previous two games, were not converting their opportunities to finish the game off.

On the half hour mark Rhys Cooper played a wonderful ball to Kane Goodchild who crossed from the right to find the head of Tommy Spencer who had no problem making it 2-0.

Three minutes later Kane Goodchild put a defense splitting ball through to Rhys Cooper who hammered the ball into the Charlestown net to make the score to 3-0.

No sooner had the celebrations stopped on the grandstand of Darling St Oval, a quick one-two between Bird and Bertos resulted in the former being intercepted in the box and the referee pointing to the penalty spot. Leo Bertos then planted his shot into the Charlestown net for a 4-0 lead and the result in the bag.

Half time found Olympic with a 4-0 lead and cruising to another victory.

The second half continued with Olympic dominating play and threatening with more goals.

Charlestown’s cause was not helped when Jarryd Johnson succeeded in getting himself sent off for dangerous behavior. From the ensuring free kick Rhys Cooper curled a cross to the head of Kane Goodchild who buried it into the Charlestown net for a 5-0 score-line.

Charlestown’s misery was put to an end when Simon Mooney smashed a shot into the Charlestown goal, after collecting a rebound from Ben Koina. 6-0.

Although all the Olympic players deserve to be congratulated for a vintage performance, Rhys Cooper left his stamp on the game through not only scoring two goals, but being everywhere over 90”.

Our next match is on Sunday at Darling St Oval against Lambton Jaffas.