Jaffas confident they can hit back against Olympic 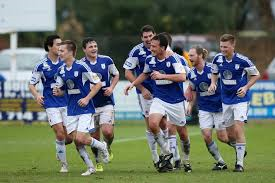 BEFORE Hamilton had a chance to celebrate their first victory over Lambton Jaffas, the 2014 major premiers were quick to remind their rivals the job was far from done on Sunday.

Olympic scored twice from set pieces at Darling Street Oval to take a 2-1 lead into the second leg of the Northern NSW National Premier League semi-finals.

Goals from Jacob Bailey and Kane Goodchild helped break a frustrating run for Hamilton, who lost their previous two finals to Lambton, in 2013, in penalty shootouts.

Several draws have helped build a healthy rivalry between the clubs since Lambton gained promotion three seasons ago, and Jaffas coach David Tanchevski was quick to remind Hamilton counterpart Michael Bolch his side were not finished yet.

“Are you sure you’re going to sing the song, mate?” Tanchevski quipped to Bolch after the game.

But Hamilton did sing and deserved to celebrate after dominating at set pieces and restricting the Jaffas to only a handful of chances.

The Jaffas started brightly but it was Hamilton who went ahead when Bailey nodded in a Simon Mooney free kick in the 35th minute.

Goodchild extended the lead in the 60th minute when he climbed high to head in a Pat Brown corner.

Peter McPherson finished a one-two passing move with John Majurovski in the 75th minute to give the Jaffas a vital away goal but Olympic held firm to maintain their advantage.

Bolch was pleased to break their hoodoo against the Jaffas and praised his side’s resilience late in the match.

“The first 20 minutes they were the better side, until we got a foot in the game, but I thought we were doing really well the second part of the half,” Bolch said.

“The last 20 minutes we scrambled well. They put us under a lot of pressure.

“But I think if we conceded a second it would have been an injustice. We didn’t, and I’ll take a one-goal lead any day of the week.”

Tanchevski was relieved to grab the away goal in the second half and believed his side deserved to take more from the game.

“That goal makes all the difference,” Tanchevski said.

“Essentially it’s half-time and we only have to get a 1-0 win next week to get through.

“Most of the game we had possession. We won the midfield battle but we just didn’t do a lot with it in the final third.

“We had two really good chances with Maj at far-post headers, which are normally his bread and butter. Remo went close with the header at the end.

“I thought we had the majority of the game and we’re fairly comfortable we can get something out of the game next week and get through. We didn’t deserve to lose and we’ll take some confidence into next week.”

Jaffas defender Kevin Davison (groin strain) was substituted at half-time and Hamilton forward Pat Brown (head wound) were the only casualties out of the game. The teams will play the return leg at Edden Oval on Sunday.

In the other semi-final, Broadmeadow came back from a 3-1 deficit to draw 3-3 with minor premiers Edgeworth at Magic Park on Saturday.

Magic, who snuck into fourth place, were looking down the barrel when Bren Hammel scored a brilliant individual goal for the Eagles on 59 minutes. Hammel flicked the ball over a defender before hitting a left-foot volley to make it 3-1.

Magic skipper Peter Haynes converted from the penalty spot in the 71st minute after Edgeworth keeper Jim Fogarty fouled Kale Bradbery on the edge of the area.

Bradbery then equalised in the 86th minute when his strike beat Fogarty at the near post.

Magic co-coach Bobby Naumov praised the fighting spirit of his side.

“You have to give the boys credit,” Naumov said.

“To be 3-1 down against Edgeworth and come back to 3-3, and we could have snatched it at the end.

“The last month the boys have been really strong.

“We have had a lot of setbacks with injuries. Even today we had Scott Pettit (knee), Jayden Barber has been crook all week and only played off the bench, Chris Berlin has injured ribs . . . we had to shuffle things around until the last minute.”

Hammel opened the scoring for the Eagles with a penalty after Magic keeper Nathan Archbold brought down Brenton Olzomer. Bradbery equalised with a tap-in in the 36th minute after Fogarty spilled Matt Hoole’s shot. Olzomer then struck in the 57th minute to put the Eagles up 2-1.

Despite letting the lead slip, Edgeworth coach Damian Zane was pleased to get a draw after three of his players battled illness in the match.

“It’s tough to take when you lead 3-1, but we were far from our best and got the draw, so I’m not complaining,” Zane said.

The second leg will be held at Jack McLaughlan Oval on Saturday.