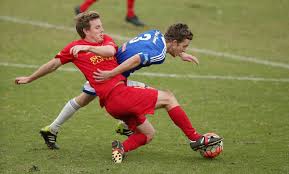 KALE Bradbery scored twice and the Virgili brothers came up with crucial plays as Broadmeadow took a 3-1 lead over Hamilton in week one of the National Premier League semi-finals.

Second-placed Hamilton were unbeaten this year and looked likely to hold onto that tag at Magic Park on Sunday after a dominant first half of the two-leg semi-final. They led after Kane Goodchild beat two defenders with strength and skill before laying off a ball for Daniel Bird to score in the 36th minute. Hamilton continued to find space close before Andrew Swan looked to have made 2-0 in the second-minute of first-half injury time. However, Luke Virgili produced a desperate slide to clear the ball off his line.

Magic came out firing in the second half and Peter Haynes converted the early pressure on 49 minutes with a crisp header from the six-yard line off a Matt Hoole corner.

Broadmeadow went ahead in the 82nd minute when Bradbery was put away on goal off a Luke Virgili ball over the top before he finished past keeper Tom Pullin with a left-foot shot. Magic then struck a major blow in the 95th minute when James Virgili, in his first game back from a dislocated shoulder, rejected calls take the ball to the corner to run down the clock, instead whipping the ball across goal to find Bradbery at the far post for the tap in.

James Virgili said “the third goal has definitely put us in a good position but it’s not over yet”.

“There’s still next week, so we just have to go on with it,” Virgili said. As for his brother’s first-half save, James said: “I don’t know how he got that. I actually turned around because I thought it was in. It was a good effort.”

While the Virgili brothers had a good day on the pitch, their father, Magic co-coach Robert Virgili, was sent from it 70 minutes in after remonstrating with a linesman about an incorrect off-side call against his side.

Hamilton coach Michael Bolch lamented his side’s failure to convert chances in the first half.

“We were all over them and we should have scored a second one, especially the one in the last minute,” Bolch said. “I thought we were really good first half but we didn’t turn up second half. I just think they competed better than us second half. They won all the loose balls and second-phase stuff, and then we gifted them goals.

“The first one off a corner comes when we’ve got a bloke on the post and he gets beaten and the other one comes off Cody Lucas’ head and goes straight to Bradbery. You make your own luck, though. They worked hard and they deserved it.”

On Saturday, Maitland, who were without Matt Comerford (broken rib), came back from a 2-0 deficit to match minor premiers Edgeworth 2-2 at a wind-swept Cooks Square Park.

Daniel McBreen (20th minute) and Dylan Holz (31st) scored for the Eagles before Matt Thompson earned and converted a penalty in the 37th for the Magpies. Ryan Clarke scored the equaliser in the 69th minute with an attempted cross that evaded keeper Jim Fogarty.