HAMILTON Olympic coach Michael Bolch admits he would never say his team were the ones to beat this Northern NSW National Premier League season.

But it’s getting harder to argue against the tag after Olympic followed a 3-2 win over premiers Edgeworth with a 3-1 victory over Broadmeadow on Sunday at Darling Street Oval in round six.

After James Virgili got in behind and scored in the seventh minute for Magic, Olympic’s Tom Spencer then Daniel Bird, twice, had shots blocked. Broadmeadow’s Michael Finlayson had a one-on-one chance denied a minute before Simon Mooney equalised in the 38th off a Kane Goodchild strike that was cleared off the line.

Olympic goalkeeper Danny Ireland blocked a Kale Bradbery shot and produced a diving save to deny Shane Paul before Bird scored in first-half injury time from Spencer’s run and cross.

Olympic made it 3-1 in the 70th minute when Leo Bertos scored from the spot after keeper Nick Hartnett was penalised for a challenge on Rhys Cooper, whose shot after the hit went in but the goal was disallowed. The win kept Hamilton two points clear at the top of the table but Bolch was wary of his side becoming complacent after two memorable victories.

“Now we go into Jets, Valo, Charlestown, so we’ve got to keep it going,” Bolch said.

“Those results against Edgy and Magic mean nothing if you don’t win those games. There’s a long way to go and I’m never going to say we’re the team to beat.”

Bolch praised the work of Tom Davies in marking James Virgili from the 35th minute, when Matt Swan went off injured, and Bertos, who dropped back to right fullback. The coach, though, was equally pleased with his strike force. “Everyone talks about Magic’s front third, but I wouldn’t swap our front third for any other team,” Bolch said.

Magic co-coach Robert Virgili believed “there wasn’t much between the sides”.

“It just came down to taking chances,” Virgili said. “We had a chance to go 2-0 up and missed it, and they’re a side that when they go ahead, they are hard to peg back.” 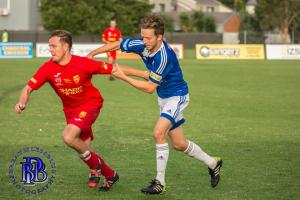