NPL Northern NSW Round 2: Hamilton Olympic come away with 3 points at Adamstown Rosebud 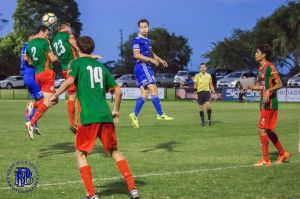 Two teams searching for their first win of the season met under the Saturday sunset, but it took until Adamstown Oval was floodlit for the visitors to find a breakthrough and claim victory.

It was a match which didn’t see either side make a huge impression, but a 63rd Jed Honery goal was enough to see Hamilton through.

The winner came after a quick counter-attack from the back, with Tom Davies clearing the ball out to Scott Pettit on the wing. Pettit ran to the byline and squared it up for Honery, who took a touch and buried it past an inrushing Isaac Terry to score the only goal of the match.

Adamstown had the first real chance of the match, after a Matt Sokulsky tackle on Hamilton’s Kyle Hodges won the ball for Connor Heydon, who had his shot turned around the post by Tyler Warren.

Olympic went close in the 18th minute, but Scott Pettit put his header just wide of the post after a nice ball in from Leo Bertos.

Rosebud went after a goal once Hamilton took the lead, and came close in the final ten minutes with Jordan Elphick turning a header at the ‘keeper.

It was Olympic who nearly made it two in the 90th minute though, prevented by Terry in goal who just managed to get a hand to a Scott Pettit chip which looked destined for the goal.

Adamstown boss Shane Cansdell-Sherriff was disappointed not to walk away with the three points.

“I have to look at the bigger picture and look at the fact we had four players playing their second game of NPL, four players stepped up to the mark and handled the level, pace and physicality of it,” Cansdell-Sherriff said.

“That for me shows a lot more than the result at the end of the day, because if they can stand up and play like that week in, week out and achieve that higher level then it won’t be too long before we see good results against good sides.

“They [Hamilton] are a good side, first half they confused us a little bit and we failed to deal with a couple of situations we spoke about prior to the game, but second half we got on top of that and took the game to them.

Two of the most fancied sides met at Charlestown on Sunday afternoon but it was the star-studded Blues which overpowered the Pies in the second half and shot their way to the top of the ladder.

Just two rounds in and Charlestown have picked off two of the potential contenders for the NPL crown this season.

It was an unchanged starting side for the Blues, who got the ball rolling this weekend in the 35th minute thanks to Riley McNaughton.

The right winger beat Maitland defender Liam Thornton with a deft stepover but had his first shot stopped by Alex Read. He made no mistake with the second, firing inside the near post and putting the Blues ahead.

Maitland pulled level shortly after half-time, thanks to a decisive piece of play which was set rolling by Matt Swan. He put through James Thompson, whose shot was deflected into the path of Ryan Clarke.

Clarke made no mistake, slotting home to make it 1-1.

A set piece helped put Charlestown ahead once more in the 66th minute. Floated in by centre-back Ljubo Milicevic, the ball found it’s way to the head of Kane Goodchild.

At the back post with it all to do, Goodchild managed to steer his header across goal and over Maitland ‘keeper Matt Trott to make the score 2-1.

The Magpies went up the other end straight away and looked to get things level once again, but a slip from Matt Comerford denied him any real effective shot on goal.

Maitland’s need to restore parity was matching Charlestown’s quality and desire to go forward, and as such the match began to open up more as it wore on.

It would be another set piece that’d spell the end of the Magpies’ hopes of a comeback for the second week running.

From outside and to the right of the area, McNaughton sent a ball in low and hard in search of a deflection – and it found one courtesy of Scott Smith.

Smith scored his third goal of the season, Charlestown’s third of the day, and tied up the three points for the Blues.

Speaking to BarTV Sports after the match, Blues striker Kane Goodchild said the key to their game is keeping things simple.

“A lot has been said about our pre-season but at the end of the day we’ve got eleven good, quality footballers,” Goodchild said.

“We simplified what we’re doing, we’re doing is basically and we’re doing it well enough that it’s hard to break down and we’re creating opportunities for me and Smithy [Scott Smith] up front.

“We’re not trying to overcomplicate it, we don’t care about the possession statistics, we just want to win and we’re playing forward to our strengths, two big forwards up front… so far we’re reaping the rewards.”

Jamie Subat wound back the clock and scored a real poacher’s goal to tie up Weston’s first points of the year, as Lake Macquarie remain rooted to the bottom of the ladder after two matches.

Kew Jaliens remained on the sideline for Weston thanks to the ankle injury he picked up in the Heritage Cup final, while Cameron Holzheimer was out for Lakes.

It took until the end of the first half for either side to find a breakthrough, and it was Weston which went to halftime ahead.

Jackson Burston played a ball in from the right-hand side and found his strike partner Tega Marcus, whose diving header wrong-footed ‘keeper Riley Hill and found its way in at the back post.

Lakes would strike back with just over twenty minutes to play through almost comical circumstances. After some nice build-up play, Paul Sichalwe unleashed a shot from inside the area which struck the crossbar.

The deflection fell right into the path of Weston’s Nathan Morris who was desperately charging back to defend, so quick that he wasn’t able to change his course and thus suffered the ignominy of scoring an own goal to level the scores.

If Nathan Morris was a name which wouldn’t seem out of place on a Bears team sheet of yesteryear, then their leveller was reminiscent of one of the goals scored in days gone by.

Chris Hurley hoofed a clearance up-field in the 79th minute, in the direction of substitute Jamie Subat who was ghosting around the Lakes defensive line.

He went off in pursuit, took a touch around the Lakes keeper and finished for his first goal in Weston colours since June 2014.

Lakes went in search of an equaliser, and had a few chances – Tom Sparre hit the ‘keeper in the 90th minute, and losing the ball under pressure shortly after – but weren’t able to earn their first point of the year.

Last week it was a late equaliser which broke their red and blue hearts, this weekend it was a 90th-minute winner which buoyed them as Kosta Petratos fired the Jets Youth into their first win of the season.

For a side which had an extra week to prepare for the season, things couldn’t have started any worse for Valentine after Chris Brown (knee) and Zac Sneddon (hamstring) taken from the pitch before the half-hour mark.

It was just after the half hour that the Jets went ahead. After building some good pressure around the Valentine box, it was a ball in from Kosta Petratos which did the damage.

Mario Shabow finished off the move and put the Jets ahead.

Valentine were level just ten minutes into the second half though, thanks to a goal from Aden Gardner. It’s his first goal for Valentine since his switch from Edgeworth last season.

Down to just one substitute for the match thanks to the two first-half injuries, it was always going to be a tough ask for Valentine.

Their task was made tougher still midway through the half when Kosta Petratos put the Jets’ second away to restore their one-goal lead with a little more than half of the second stanza to play.

Valentine were ultimately unable to fight back from a goal down for the second time in this one, and the Jets Youth went on to claim their first win of the campaign.

It’s a case of one point gained, two points lost for both sides as Lambton let a comfortable lead slip for the second week in a row while six shots on goal in injury time with the scores level weren’t enough for Magic to find a winner.

Lambton tired and dropped deep in the second half sitting on a two-goal cushion, which allowed Magic to come storming home – but it was Lambton who looked comfortable for the first two-thirds of this one.

Marcus Duncan went down early in the first half clutching at his left arm, which had the Jaffas bench worried, and Dain Greentree ready and waiting in the technical area. After some attention, Duncan returned to the field albeit gingerly.

Jaffas almost had the lead after the 19th minute when Joel Griffiths was played in behind and tees up Pat Brown who turned it in, but Griffiths was offside.

They went ahead for real shortly after with some spectacular play. A Tom Waller throw was flicked on by Ryan Griffiths to Pat Brown, who found Joel at the far post. The former Jets man made no mistake in putting Lambton up 1-0.

The visitors almost had a second just after the half-hour mark, but a superb Luke Virgili sliding interception kept Pat Brown from tapping in for a Lambton second.

Ryan Griffiths tried the spectacular in the 41st minute, turning a bicycle wide of the post after the initial attempt beat Paul Bitz in the Magic goal but hit the crossbar.

Brown made it two for Jaffas shortly after the break, heading home a Tom Waller cross and giving the visitors a two-goal buffer.

They almost made it three just before the hour mark after a lightning-fast counter-attack. A John Majurovski header was saved by Brad Swancott, who sent the ball whizzing up the pitch. Joel Griffiths found brother Ryan unmarked on the top of the box, whose left-foot shot looked destined for the net – but sailed past the upright.

Lambton were beginning to show signs of the fatigue which set in against Edgeworth last weekend, and Magic capitalised with nearly three-quarters of the match gone when Michael Sessions gave away a penalty after a foul on Kale Bradbury.

The number 9 made no mistake from the spot, making the score 2-1.

Their second goal came from the most unlikely of scorers – captain Josh Piddington. After some nice interplay between Bradbury and Virgili, Piddington was on hand to seize on a nice Virgili through ball and finish with some conviction to level the scores.

Injury time should have spelt victory for Magic – but they were unable to finish off a plethora of chances. Substitute Dino Fajkovic shot wide, while Majurovski hit a shot at Fajkovic and Virgili mishit a volley which would have tested Swancott in the Lambton goal.

Ultimately, the two sides had to settle for a share of the points.