PS4 NPL NNSW Round 15: Hamilton Olympic held to a 1-1 draw by Broadmeadow Magic 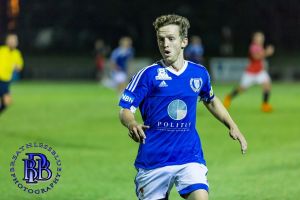 Hamilton Olympic were held to a 1-1 draw at Magic Park, giving match point advantage for the Minor Premiership to Edgeworth whose match with Valentine on Saturday was washed out.

In icy cold conditions Hamilton Olympic showed their intentions as early as the  7th minute when Rhys Cooper crossed from the right and found the head of Kane Goodchild who headed low and to the corner of the Magic goal, only to have Nicholas Hartnett deflect the ball onto the bar and out for a corner.

Seven minutes after this, Olympic worked the ball well in midfield with fast one touch passes amongst Bailey, Bertos, Spencer and Goodchild who found an unmarked Daniel Bird on the left and whose shot ended up in the Magic goal for a 1-0 lead.

Olympic look composed, are controlling the midfield and look well in control.

The first sniff of an opportunity for Magic doesn’t arrive until the half hour mark when Jayden Barber got on the end of a Luke Virgili cross but Danny Ireland slammed the door shut!

Ten minutes before the interval and Olympic have given Magic more space in the middle of the field and are defending a lot deeper than they were since the beginning of the match.

James Virgili takes on  Kyle Hodges on the right, is unable to go around him, but is able to whip a cross to Kale Bradbery who upon controlling the ball, loses his marker Grant Brown who slips and falls to the ground. With Danny Ireland completely exposed, Bradbery has no problem bringing the score even 1-1.

Within a minute a great combination in the middle of the park by Olympic brings Kane Goodchild on the edge of the box and a beautiful cross screaming across the face of the Magic goal but no head to bury it in the net.

Olympic are on  top again controlling the midfield probing the Magic goal but they can’t apply the finishing touch that will put them in the lead again.

On the 45’ minute, Magic make a rare counter attack through James Virgili and in a 50-50 challenge with Danny Ireland who clears the ball, there are appeals for a penalty but the referee waves “play on”.

Olympic had the better of the first half, looked in control for most of the game and lacked the final touch. 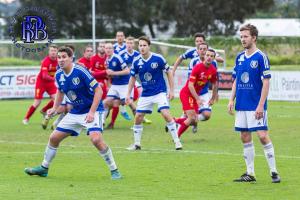 The beginning of the second half found Magic on the attack with Kale Bradbbery beating Grant Brown, advancing into the box and passing to Jayden Barber who fired a shot into Danny Ireland instead of placing it into the right corner of the Olympic goal.

Olympic gain control of the midfield again are moving the ball with ease but lack the killer finishing touch. In the 61st minute three consecutive shots at the Magic goal by Bird, Bertos  and Swan, fail to send Olympic into the lead.

In the 75th minute a great through ball by Simon Mooney set up Kane Goodchild with a one-on-one with Nicholas Hartnett but he fired into the open hands for the Magic goalkeeper.

As the minutes ticked away the intensity of Olympic’s play began to increase committing numbers in attack, desperately looking for the goal and the three points.

Seven minutes from time, Leo Bertos crosses from the left into an unmarked Kane Goodchild in the six yard box who took his shot first time and instead of burying it into the Magic net, sent it sky-high!

A few moments later Kane Goodchild turned provider to Simon Mooney who found himself inside the box but was unable to get his shot in before he was swamped by Magic defenders.

With three minutes from time Kale Bradbery appealed for a penalty on behalf of Broadmeadow Magic and seconds later Rhys Cooper did the same on behalf of Olympic.

The game continued with open end to end play but despite Olympic having the majority of goal scoring opportunities to secure the three points, they were unable to break Magic down 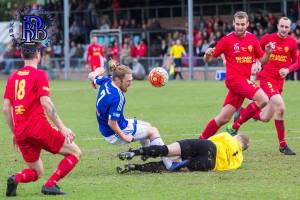 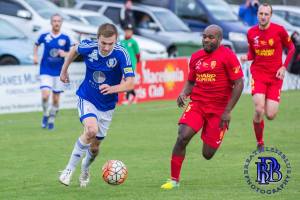 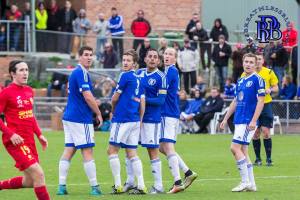